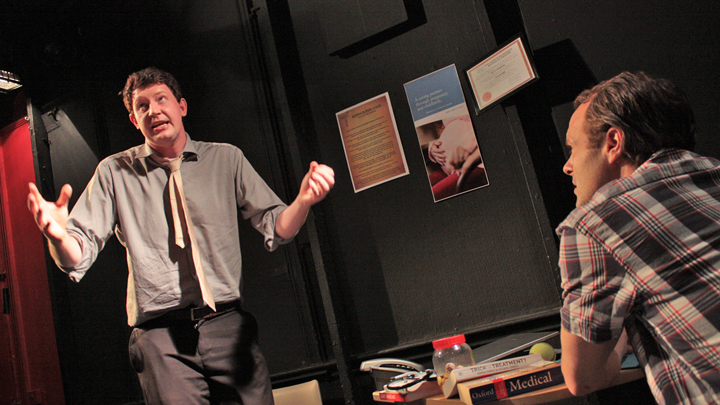 Will’s sick with a mystery illness.  He’s in a world of pain and his test results look like David Lynch directed them.  And it seems that no-one, from his GP to his girlfriend, has got a solution.  Well, his sister does, but she’s a homeopath so it’s fairly heavily diluted…

Produced in association with The Nightingale Collaboration

“The best peer reviewed play in London” – The Pod Delusion

“The play’s morals elevate it from comedy to satire…Consistently hilarious.” – The New Current

“The dialogue is smart and funny with some cracking one liners.” – Camden Voyeur

“An interesting and successful attempt to encourage skepticism.” – remotegoat

“Quietly and consistently funny and, to be honest, quite sweet.” – The Sky is Falling

“Brilliant performances, a slick, and at times hilarious script, combined with confident and effective staging, makes this an enjoyable and thought-provoking evening out.” – London Student Newspaper

“The production’s cast and script deliver on the comedy front.” – Stage Insider